At the NCA ATM class at the CCCC, we are the fortunate inheritors of a 1960s-era vacuum chamber and aluminizer that was twice given away as surplus (first by the Federal Government or US military, and then later by American University), but which still works.

Much of the credit should be given to Dr. Bill Pala, who snagged it for AU from the US surplus system; the late Bob Bolster and Jerry Schnall, who together ran it for a long time; Dr. John Hryniewicz; Alan Tarica; and several others whose names unforotunately escape me at the moment but who have given excellent advice on repair and maintenance and even provided replacement parts.

Here are four photos of the rig, followed by two of our finished mirrors. 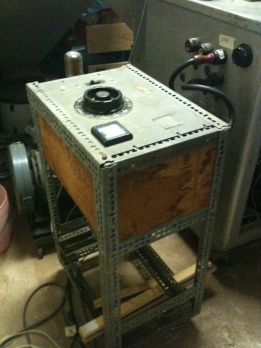 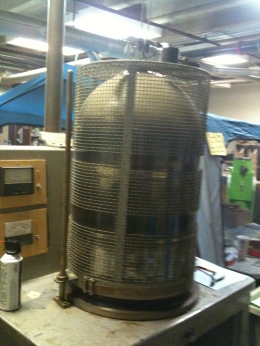 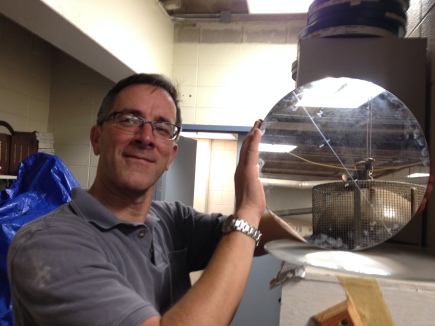 The question came up: (1) how thick are the coatings we generally put on our mirrors, and (2) how efficient is it — that is, of the aluminum that we vaporize, how much of it actually lands on the mirror?

I have attached some scanning electron micrographs of the top of the film.  The grain structure is very fine, you can compare the size with the scale bar at the bottom that shows you the length of the total bar (10 ticks, between each pair of ticks is 1/10 of that number).  There are some particles or perhaps larger grains on top.  They are still very submicron, a couple of tenths at most. 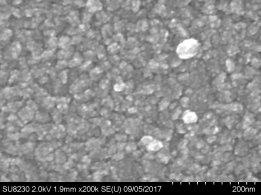 The way the mirrors get coated is basically three steps:

(1) We get the mirror very, very clean, using both with a special detergent (Alconox) bbefore it goes into the vacuum chamber, and high-energy electron bombardment while the pumps are working;

(2) We get the pressure in the chamber very, very low, so that there are relatively few air molecules or atoms between a coiled tungsten filament and the mirror. (We get the pressure down to somewhere in the range of 7*10^-5 to 4*10^-4 Torr, depending on which gauge you believe. This is quite low indeed – roughly the air pressure at the altitude of the International Space Station; this is needed so that the aluminum atoms won’t tend to bounce of the molecules of nitrogen and oxygen and lose their energy.

(3) We melt, and then boil off, a small quantity of pure aluminum from the filament, which goes off in all directions, fairly evenly; the Al atoms that happen to be going in the right direction ashere to the mirror. There, they form a very even, reflective layer.

You may wonder, how do we prevent this layer of aluminum from oxidizing once it comes back into contact with the normal atmosphere? Answer: we don’t. Aluminum oxide is the main component of rubies, sapphires, and corundum, which are very hard. Since the stuff we deposit is relatively pure, it doesn’t have the red or blue color of those pretty and precious gems, and it is transparent, so it forms a hard, transparent, protective layer all by itself. If your coating tarnishes or gets extremely dirty, the aluminum-and-gunk layer is pretty easy to remove with a little bit of hydrochloric acid mixed with copper sulfate. Then you clean it off and re-aluminize.

(Yes, commercial labs do overcoat their mirrors with stuff like Silicon Monoxide and Silicon Dioxide (aka quartz), but we haven’t collectively figured out how to do that with our minimal budget.)

So, again: how efficient is it? What percentage of the atoms of aluminum headed to the mirror, actually adhere to the mirror?

To answer this, it helps to pretend that the filament is at the center of an imaginary sphere, shown below, and that the mirror (facing down, towards the mirror) happens to be at the top of this sphere. Recall that to a good approximation, the aluminum that evaporates off of the coil goes in all directions, i.e., it coats this entire imaginary sphere equally – or it would, if there wasn’t all sorts of pipes and wires and glass bell jars in the way.

The filament and aluminum is located at the center of this sphere.

I measured the distance from the filament to the mirror, and found that it’s just about 20 inches, or roughly 500 millimeters. Archimedes figured out long ago that the surface area of a sphere is equal to four times the area of any circle contained in the sphere, or 4*pi*r^2 in our current notation. So that imaginary sphere, on which the aluminum is deposited, has an area of about 3.1 or 3.2 million square millimeters. 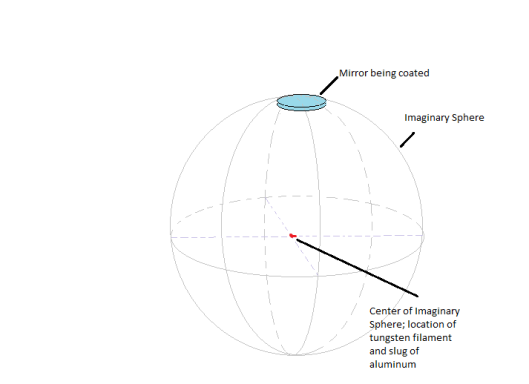 We currently use slugs of aluminum that are about 15 mm long (give or take a couple of mm) and cut (not at right angles, because the pliers won’t do that) from wire with a diameter of 5 mm (radius 2.5 mm). If we pretend the slugs are cylinders then the math is much easier: we can use the formula pi*r^2*h to get a volume of about 295 cubic millimeters, and we will pretend that all of the aluminum boils off (and none of it sticks like glue to the tungsten) and goes equally in all directions. (Probably not the case, but in practice it doesn’t seem to matter much.)

Now if we divide the 295 mm^3 of aluminum by the total surface area, 3.2 million mm^2, we get the average thickness. I get a result of about 9.1*10^-5 mm, which converts to 91 nanometers. Which is very close to the result that John H found.

On the other hand, most of that aluminum is wasted, because it’s NOT aimed at the mirror. If you have an 8-inch diameter mirror (about 20 cm diameter or 100 mm radius), its area is 10,000*pi square millimeters, or about 31,000 mm^2 – and that’s only one percent of the area of the entire imaginary sphere.