Yesterday we moved a lot of heavy metal and glass to temporary quarters so that we can mount a modern, heavy-duty Astro-Physics 1600GTO mount on one of our piers.

One of our founders, Bob Bolster, had built with his own hands a very unusual 30-cm Wright-Newtonian telescope and an equatorial mount on a permanent pier. Unfortunately, the drive stopped working and he was unable to get it back into working order before he died. So yesterday we removed it from its mount – and it took five of us with a 2-ton chain hoist, lifting straps, and a custom-built cart to winch it out of the observatory and into our operations cabin.

We all had fun doing it, nobody got injured, nothing got damaged, and the night that followed was the clearest one I’ve seen in a long time! Great open clusters in Cygnus!

I attach some videos and photos of the move.

By the way, that large disk of optical glass you see in the last few photos is for sale. We aren’t sure what type of glass it is, but you can find details here at Cloudy Nights or Astromart. It is 55 cm across, 83 mm thick, and we measured its weight as 59 kg (130 lbs). We calculate its density as 2.99 g/cm^3, and the nearest match in the Schott catalog is N-SF64 which has that exact density, but N-KZFS4 and P-SK57 are close as well (3.00 and 3.01, respectively). It’s definitely way too dense for Borofloat, Zerodur, or any other borosilicate glasses. The glass known as BAK-4 has density 3.05, which I don’t think is close enough, since there are several others between 3.00 and 3.05.  For comparison, the relatively inexpensive optical glass known as BK-7 has a density of 2.5.

We are asking $950 for the blank. If you were to order a brand-new one from any optical glass company it would cost you much, much more! 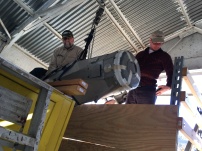 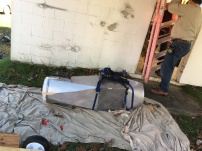 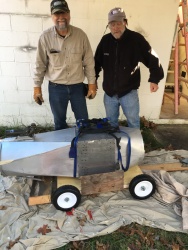 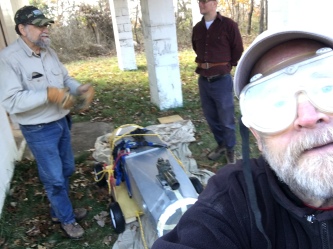