Sharing Steve Ruis’ handy methods anybody can use to show that the earth is in fact round. Very clever!

An Open Letter to the Many Flat Earthers Now in Existence

Dear Flat Earthers,
Many people have been derogatory of your belief that the Earth is flat. Please note that they are belittling your belief, not you per se. You, personally, are an idiot, but that is probably not your fault.

Here are any number of accessible approaches for discovering the shape of our beloved planet. Enjoy!

Use Your Phone!
On Christmas Day, here in Chicago, I expect there to be snow on the ground because, well, it is winter. On Christmas Day I can pick up my phone and dial up anyone in Australia and ask them “What season is it?” They will tell you that it is summer in Australia. You might want to ask your flat Earth mentors how it could be winter and summer simultaneously on a flat Earth.

Use Your Phone!
Go to a globe and pick a spot half way around the Earth (I know it is a false representation in your belief, but humor me.) In the middle of the day, phone somebody at or near that spot. Call a hotel, they are always open. Ask whoever responds “Is it light or dark outside?” They will tell you that it is dark where they are. You might want to ask your flat Earth mentors how it could be light and dark simultaneously on a flat Earth.

Look Up What Local Time Was
In the US there was this concept of “local time” which was that “noon” was when the sun was at its highest point in its arc. You could call up people on the telephone who were not that far away and ask them what time it was and they would tell you something different from what your clock was telling you. The farther away they were, the greater the difference would be. On a flat Earth the time would be the same everywhere.

Look Up What Time Zones Are
I am writing this in the central time zone in the U.S. These zones were created at the behest of the railroad industry whose dispatchers were going crazy making up schedules for trains when every place had their own times. By creating these “zones” everything would be exactly one hour off from those in neighboring zones, two hours off for the next over zones, and so on. If you don’t believe me . .  pick up your phone and dial up a friend who lives a considerable distance (east-west) away from you and ask them what time it is. The time they state will be a whole number of hours away from your time. Heck, even the NFL knows this. When I lived on the left coast, the games started at 10 AM and 1 PM. Now that I live in the central time zone, the games start at 12 Noon and 3 PM. Over New York way the games start at 1PM and 4 PM. Do you think those games are replayed in one hour increments? Nope, time zones!. You might want to ask your flat earth mentors how it could be that simultaneous games start at different times on a flat Earth.

Watch the Video
Astronauts in the International Space Station (ISS) have made continuous videos of an entire orbit of the Earth. It takes only about an hour and a half about the length of a typical Hollywood movie. During the whole movie the earth appears round, and yet it is clear that different continents are passing in our view.

Now you may argue that NASA made this movie as propaganda for the Round Earth Conspiracy. It is certainly within our CGI abilities at this point, but you may want to ask why NASA would want to do such a thing? Plus, many astronauts have taken their own cameras aboard and taken pictures for themselves and they show the same thing. How could the Round Earth Conspiracy have allowed that to happen? It must be incompetence! Conspiracies aren’t what they used to be!

Da Balloon, Boss, Da Balloon
Many amateurs, unaffiliated with the government, have launched rockets and balloons high up into the atmosphere to take pictures. Every damned one of those pictures shows that the Earth is round. How come all of those cameras ended up pointed at the curved edge of your round and flat disk Earth? Such a coincidence!

An Oldie But Goodie #1
Occasionally, during a lunar eclipse, you can see the shadow of the earth falling upon the Moon. The shadow is always circular. This would be true if the flat earth were always dead on to the Moon, but the Moon orbits the Earth and wouldn’t a flat Earth be edgewise, often as not, and wouldn’t that create a non-round shadow on the Moon? Inquiring minds want to know.

An Oldie But Goodie #2
It was claimed that one of the first demonstrations of the earth being round was the observation of ships sailing west from Europe/England could be observed for a while but the ship itself was lost to sight while the mast was still visible. This would not happen on a flat Earth. The whole ship would just get smaller and smaller as it sailed west.

For pity’s sake, I live 22 stories up and the shores of Lake Michigan and I cannot see anything directly opposite me in Michigan. All I can see is water, with any kind of magnification I can muster. And I am not looking across the widest part of this lake! If the earth were flat, the lake would be flat and I could see the Michigan shore.

All of the fricking satellites! Do the math. What kind of orbit is stable around a flat disk earth? Answer none! And there are hundreds of the danged things in orbit.

Also, just for giggles. Look up what a Foucault pendulum is, And explain its behavior based upon a flat Earth.

PS You may be getting good vibes in your special knowledge that you know something other people do not. However, would not that special feeling be more worthwhile were you to volunteer at a food bank or a day care center or senior center? Wouldn’t doing something worthwhile be more rewarding that making a statement about how those pointy-headed intellectuals aren’t so smart?

PPPS Regarding the 200 foot wall of ice that supposedly exists at the “edge of the disk,” supposedly so all the water doesn’t flow off and be lost into space. By now don’t you think someone would have sailed next to that wall all of the way? That distance would be somewhere in the neighborhood of a 28,000 mile trip. Has anyone ever report such a thing? Hmm, I wonder why not

I’ve been trying to make an optical flat for some time now. It’s not easy, even if you are starting with a piece of ‘float’ glass – modern 3/4″ thick window sheet glass that is manufactured by floating a layer of molten glass on a bath of molten tin.

The test apparatus consists of a supposedly-flat 12-inch diameter and a monochromatic light box, and my own gradually-increasing understanding of what the interference lines actually mean. Essentially, they are like contour lines on a topographic map, but the trick is to figure out which sections represent valleys and which ones represent hills. It’s taken help from other amateur telescope makers (particularly Philip P) and sections of Malacara’s book on Optical Testing and http://www.lapping.com .

It’s pretty amazing how we can measure stuff that is soooooo small!

Here are some photos in chronological order of my working on them. I would paste some videos but WordPress won’t allow them and I don’t feel like uploading them to YouTube. BTW: I am not done!!! 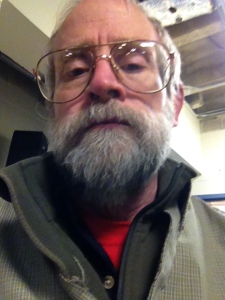 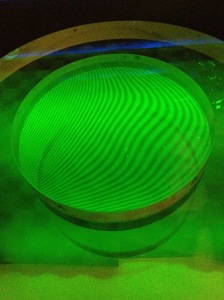 Up until this point I was trying to make the flat more perfect by using a hard Gugolz lap of full size (6 inches in diameter), much as we do with parabolizing concave mirrors. I don’t think I made a whole lot of progress. Then I read some of the papers that Philip P sent me, and re-read the Malacara, and decided to think of the contour lines in terms of measures of height, and decided to use a two-inch-diameter lap only on the parts that appeared to be “high”. I marked the back of those regions with a Sharpie permanent marker (which comes off easily with isopropyl alcohol when needed) so I could see where to work and could see if what I did made any difference.

The places that I marked with the letter H were High spots, kind of like you see on a weather map that is plotting isobars (lines connecting places with the same barometric pressure). The lower right-hand corner was one of those places, as was the smudged region at about 9 o’clock.

BTW I got the green color by using ordinary fluorescent lamps and two carefully-selected theatrical lighting gels to filter out all the light with wavelengths either longer than or shorter than the green Mercury vapor line of 5461 Angstroms.

By the way: I’ve discovered that the 12-inch-diameter optical flat that is underneath my 6 inch test flat isn’t as flat as I thought. Boo.

Will work on this some more this afternoon.